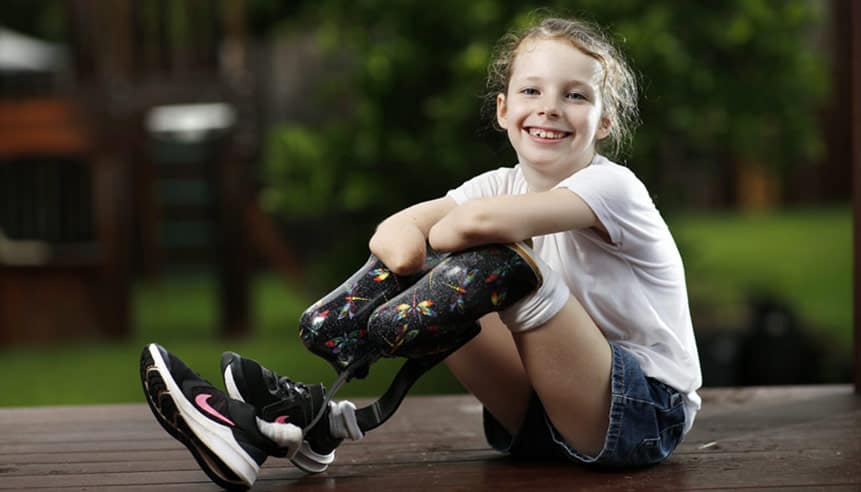 Photo courtesy of The Courier Mail

Mia lost her arms and legs to sepsis when she was four, but today, according to her mum Amy she’s as active as any other eight-year-old.

“Mia is now into her seventh set of prosthetic legs. She has chosen so many beautiful prints but these new legs with dragonflies on a black, sparkly background are possibly my favourite.

“Just like zippy dragonflies, Mia is agile – and a fast runner in her blades. They are bouncy and she often enjoys racing with her younger brother.”

Mia’s a world away from the sick little girl who was fighting for her life in intensive care after what was initially thought to be just another childhood bought of gastro or flu developed into sepsis.

“She felt sick in her stomach and vomited. We had her checked out by our local GP and again in Emergency, but it was diagnosed initially as a suspected case of gastro and later as Influenza B and viral myositis,” Amy recalls.

The preschooler went home to rest and recover but her condition continued to deteriorate. Within 24 hours she was unable to focus or understand anything her parents were saying to her. She couldn’t put weight on her legs, and within 48 hours developed a light purple rash which blanched initially.

“It escalated very quickly the second time we went to the Emergency department. She was rushed into intensive care within a few hours of us arriving and put on life support.”

Mia spent six days in intensive care, and another nine weeks in the Queensland Children’s Hospital. The infection and organ failure caused by sepsis meant she suffered extreme damage to her hands and feet, leading to the amputation of her arms and legs below the elbow and knee joints.

Since her life-threatening experience with sepsis in 2017, Mia has continued to master the use of her prostheses and build her abilities.

“Mia is doing amazingly well with her legs, but it has taken time to build up that muscle strength and balance,” Amy says.

“When she got her first set of prosthesis I thought, ‘This is inconceivable that you can move in these and balance on your knee caps and run’. But she can do it.

“It really does show how people and children can adapt. It is amazing. Where she is now to what I thought was possible three years ago, is almost unbelievable.”

She is learning at school, loves swimming and cooking, and playing with her older sister Ellie and younger brother Max.

“Mia continues to impress and amaze us every day. She is so determined. She is strong. She is fun, kind and cheeky.”

While Mia and her family focus on her recovery, they are also committed to raising awareness of the signs and symptoms of sepsis.

“Early recognition and management of sepsis saves lives,” Amy says. “A parent knows their child best. If your child or family member is more unwell than you have ever seen them, go back to the hospital if you’re still worried and ask. Could it be sepsis?”