What started as a fun family outing for 17-month Eliana, of Bundaberg, ended in a painful admission to emergency because someone did not take the time to safely extinguish their camp fire.

Eliana suffered second degree burns to her right hand and foot when she innocently walked over a hidden campfire that had been covered in sand. Fires extinguished in this way can retain heat of up to 100°C for eight hours after the flames are no longer visible.

Mum, Sara, said the sound of her youngest daughter’s scream was something she will never forget.

“Our plan was to have a relaxing family afternoon fishing and swimming,” Sara said.

“Eliana’s uncle came up from the water to bait his line and she walked around the parked car, out of sight to see what he was doing which is when we heard the most shocking scream and cry.

“I froze with shock and before I knew what was happening, my uncle was running toward the river with Eliana in his arms.” 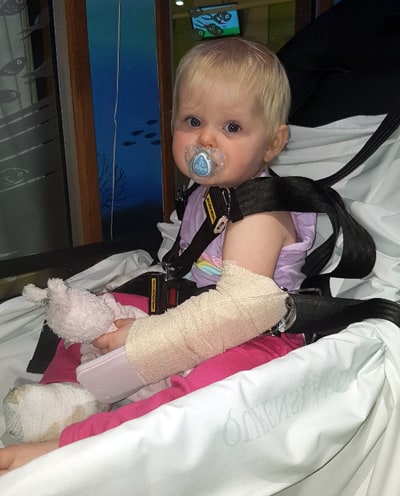 Sara kept Eliana in the river until the ambulance arrived. She received pain relief and the ambulance officers applied burn pads and cling wrap to her wounds.

The doctors at Bundaberg Base Hospital put Eliana to sleep while they better examined the extent of her injuries and removed the blisters and dead skin from her foot and hand.

“This was unbearable for me to watch,” Sara said.

Eliana was transferred by air to the Queensland Children’s Hospital for the first of several surgeries to change her bandages. She will require more surgery later this year to have a skin graft.

Sara urged all members of the public who enjoyed camping and the outdoors, to properly extinguish as campfire with water (at least 10 litres of water is recommended) before leaving a campsite.

“Because of someone else’s carelessness, my daughter has suffered immense pain,” Sara said.

“On top of the surgeries, she will need regular appointments for many years ahead to monitor the way the skin graft adapts as her body grows.

“Just an extra few minutes to extinguish a fire correctly with water will save someone else a lot of hurt and pain.”