This study aims to develop a multicentre trial and to assess which children with common respiratory illnesses such as pneumonia, bronchitis and asthma benefit from using Nasal High Flow (NHF) Therapy. We will perform a study comparing current best practice (standard oxygen delivery via subnasal cannula or facemask) versus NHF therapy.

With the introduction of this easy-to-use respiratory system in regional and tertiary centres, we are aiming to investigate if NHF therapy is the superior treatment for these children in comparison to standard oxygen delivery. We will also investigate if there is a reduction in the need for transfer of these patients to the intensive care unit. Find out more:

Information for parents and guardians of our patients

Why are we conducting the PARIS II study?

What is the aim of the PARIS II study?

This study aims to develop a multi-centre trial and to assess which children with common respiratory illnesses such as pneumonia, bronchitis and asthma to name a few benefit using High Flow therapy. For this purpose we will perform a study comparing current best practice (standard oxygen delivery via subnasal cannula or facemask) versus High Flow therapy. With the introduction of this simple to use respiratory system in regional and tertiary centres we aim to investigate if High Flow therapy is the superior treatment for these children in comparison to standard oxygen delivery, and to investigate if there is a reduced length of hospital stay.

What is high flow therapy?

High Flow therapy is a type of respiratory support that delivers a higher flow of medical gas to a patient through an interface (nasal cannula) intended to achieve the following for children with respiratory distress:

What is being investigated?

Comparing High Flow therapy with standard oxygen therapy delivery on children 1-4 years (up to but excluding the 5th birthday) with common respiratory illnesses and investigate which therapy has the reduced hospital length of stay.

Which patients can take part?

Children 1-4 years of age (up to but excluding their 5th birthday) can be included in this study.

What does the PARIS II study involve for the children in the trial?

Children who are enrolled into this study will be allocated to a treatment arm that is standard therapy in the participating hospital.  Children included are those who are 1-4 years of age (up to but excluding their 5th birthday) who have Acute Hypoxemic Respiratory Failure (AHRF) or more commonly known as common respiratory illnesses such as pneumonia and asthma.

Children will present to the emergency department and be assessed and treated by the medical and nursing team.  If the child needs oxygen they will be given oxygen.  If the child is admitted to hospital, the clinical staff will test if the child still requires oxygen by removing it and testing their saturations level.  If it is deemed low for the child the staff will then randomise the child into the study and apply the allocated treatment arm.

The two treatment arms are:

The parent/guardian will be approached during the child’s hospital stay at some point regarding consent for the study team to obtain the physiological values such as heart rate, respiratory rate of their child.

If at any time the parent/guardian wishes to opt out of the study they can do so by discussing this with their medical officer.  This will in no way change the care that your child receives.

Worldwide, the respiratory distress associated with pneumonia and other causes remains the leading cause of death in children. In Australia, 34% of intensive care admissions for children are due to respiratory disease, which encompasses viral infections representing 19%, asthma 7% and pneumonia 8%.

Our proposed study encompasses these three key elements: we intend to test if early use of NHF therapy reduces the risk of progression of respiratory distress requiring mechanical ventilation and reduces the length of stay and burden of the disease.

The rationale of this study is based on the global burden of respiratory disease and an urgent need to test if NHF therapy can reduce health care costs and potentially mortality rates in under resourced countries.

The aim of the study is to investigate in a randomised controlled trial performed in children aged 1-4 years (up to but excluding 5th birthday) presenting with acute hypoxemic respiratory failure if the early use of Nasal High Flow therapy has a lower treatment failure rate compared to standard oxygen therapy with a reduced hospital length of stay.

The participating centres will be enrolling patients to capture a total of 1542 patients with a 1:1 Ratio randomisation.

The clinical importance of this study is to create high-grade evidence for the use of NHF therapy in children, an important knowledge gap that may have the potential to change worldwide standard clinical practice and reduces the burden on the health care system. Thus our proposed NHF therapy study will be a landmark trial to test the effect of a major change in the respiratory care path for AHRF in children. 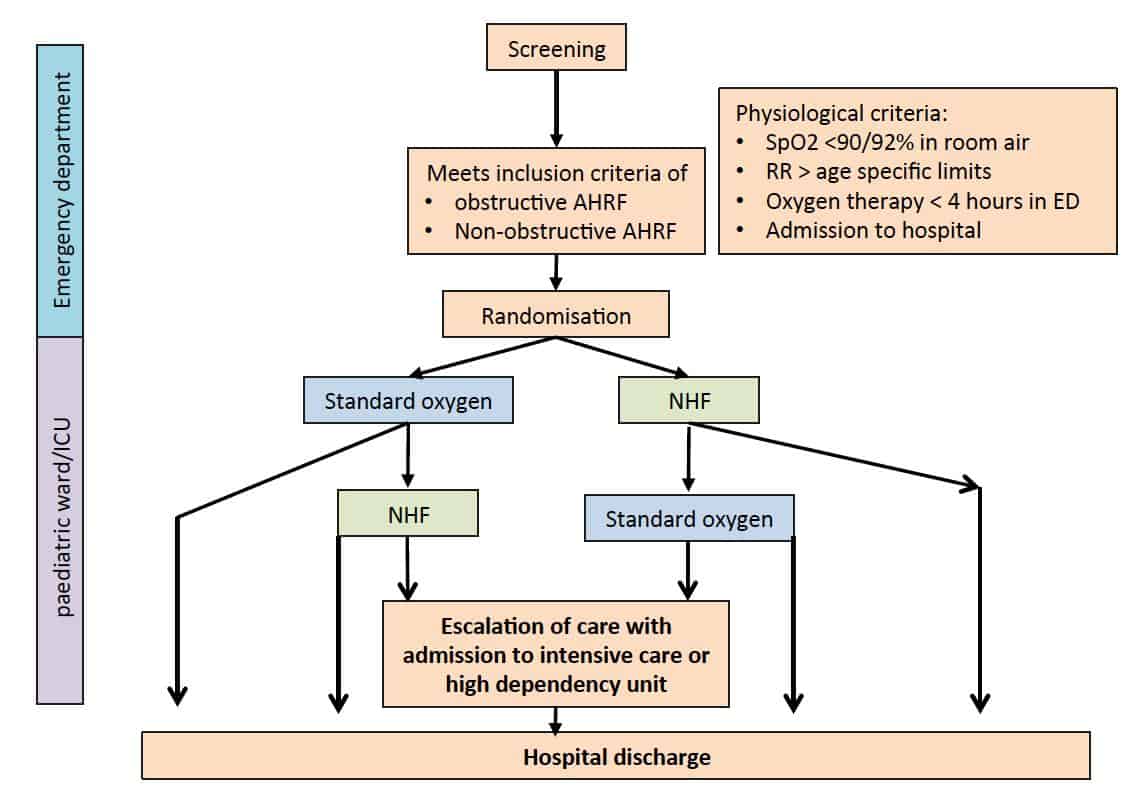 Escalation of care with or without change in therapy in both intervention arms. At any time there is a change in oxygen therapy (standard oxygen to NHF therapy or NHF therapy to standard oxygen) data on reasoning for the change in therapy will be captured. Similarly if there is an escalation of care to intensive care or high dependency unit the clinical criteria will be recorded to inform the decision making process.

The primary outcome is defined as the treatment failure of the randomised therapy, requiring change in therapy or escalation of care to intensive care/higher level of care.

Children presenting with increased work of breathing, oxygen requirement to maintain SpO2 ≥90/92% (dependent on hospitals current threshold for applying oxygen therapy) and an increased respiratory rate (age dependent).  The syndrome of AHRF represents an array of clinical diagnoses such as pneumonia, pneumonitis, acute lower respiratory tract infection, reactive airways (asthma) including bronchiolitis. For the purpose of this study there will be two groups of patients investigated with a pragmatic and point of care definition, which includes:

Escalation of care, or change in therapy

The following 16 centres (Emergency Departments and Paediatric Departments) have agreed to participate in the study:

We are fortunate to be supported by funding grants including:

Recent NHF therapy journal articles which may assist with greater understanding and knowledge are the following.