The first patients have moved into a new 29-bed orthopaedic and neurosurgical ward at the Queensland Children’s Hospital, part of a $20 million expansion project.

The expansion will also see an existing ward refurbished to deliver an extra six oncology beds in early 2021, boosting the oncology service’s capacity by 25 per cent.

Health Minister Yvette D’Ath, who officially opened the new ward with 14-year-old patient Jade (pictured above with nurse Claire Levitt), said the new inpatient ward on Level 12 would ensure the hospital could meet the state’s growing demand for specialist services for children.

“This will make a significant difference to the lives of the many children and families who use the Queensland Children’s Hospital, as well as the staff who work there,” Minister D’Ath said.

Children’s Health Queensland Chief Executive Frank Tracey said the new ward and oncology rooms had been co-designed with patients, families and hospital staff to ensure they were welcoming, safe and functional.

“Working in partnership with the families who will use the service and the staff who will work there was invaluable to the process,” Mr Tracey said.

“Their ideas and feedback has helped us create an even better hospital experience for everyone,” Mr Tracey said. 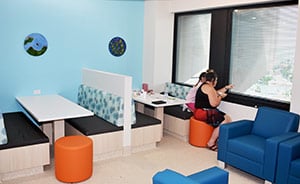 “Families told us they wanted shared breakout areas to connect with others, and to have some space for quiet family time, so design features such as booth and lounge seating have been incorporated into the family lounges.

“We also know that art in the hospital setting enhances patient wellbeing and promotes healing, so our Arts in Health Program worked with children, young people and their families to curate a wonderful collection of pieces to line the walls of the new ward. 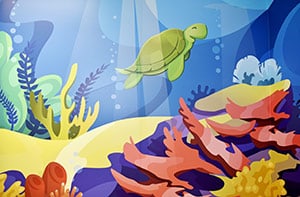 “Students of the Queensland Children’s Hospital School also chose the ‘under the sea’ theme for the distraction imagery on the treatment room walls, which brings a sense of vibrancy to these clinical spaces,” he said.

The new ward includes a combination of two and four-bed rooms, a six-bed high-acuity unit for children requiring close observation, a physiotherapy room and central nursing stations designed to provide maximum visibility of patients throughout the ward.

With the Level 12 ward now open, focus will turn to delivering the additional oncology beds, which will be available in early 2021.

View the flythrough of the new ward.