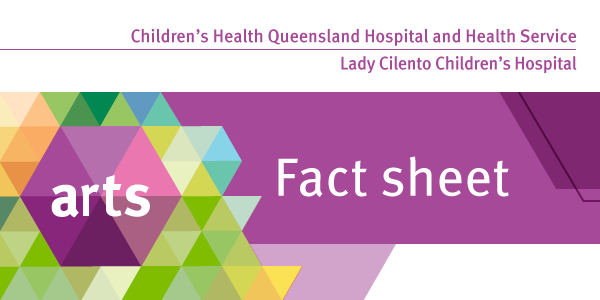 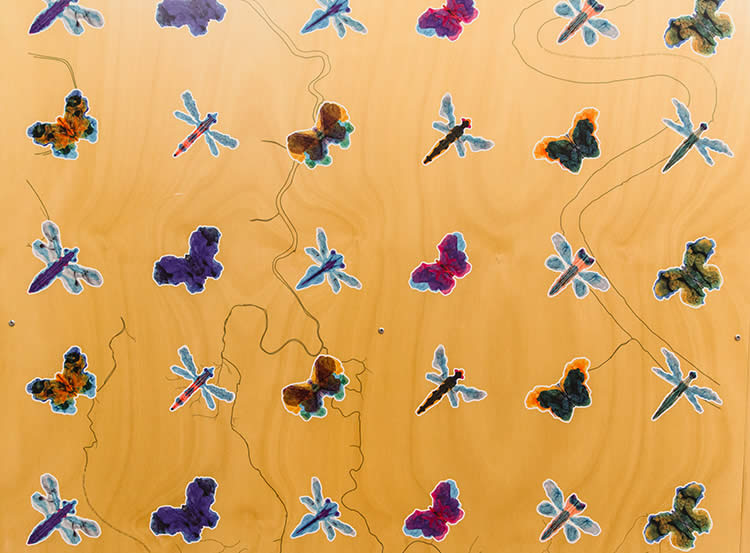 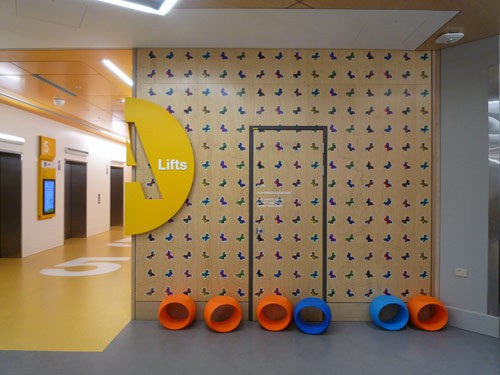 Digital print on timber veneer
Commissioned by Queensland Health for the Queensland Children’s Hospital
Location: Lift cores A & B, levels 1-7

Information courtesy of the Queensland Museum.

River Branches reads as a grid pattern, representing a collage of elements referring to the significance of the Brisbane River and the flora and fauna of Queensland.

Within the patterns, each individual panel reveals a layering of three collage elements. The first element traces topographical sections of the Brisbane River and its tributaries. The river lines are printed in grey to suggest a hand rendered pencil line etched onto the surface. The second element, embedded within the river lines, uses text quoting interesting facts and figures (see below) sourced from Queensland Museum publications.

The third element of the collage, an overlay of individual multi-coloured forms from the natural world, outlined in white, acts as the dominant visual motif. The forms were initially created from the process of ink blotting onto folded paper, a craft activity which is very familiar to children. The shapes resemble bats, cicadas, sea creatures, butterflies, dragonflies, moths, flowers and leaves, resulting from first hand observation and research undertaken at the Queensland Museum. The white outlines define each form, illuminating the translucent layers of the ink and underpinning the original hand cut paper inkblot process. I wanted each shape to be a size that would comfortably fit in a child’s hand.

• Flying foxes are an extremely important pollinator of our native hardwood forests.
• At flowering time, honeyeaters are frequent mangrove visitors.
• Stick Insects. These large, leaf-eating insects (Order Phasmida) are masters of camouflage.
• Some resemble sticks or twigs, while others are more leaf-like.
• Distinctive communities of plants, occur along the shores, and in the shallow waters, of Moreton Bay.
• Lagoon systems (which include billabongs) form along watercourses through dry eucalyptus forest.
• The Greater Brisbane Region is one of the most botanically rich areas in Australia and
the numbers of eucalypt species that grow here reflect this diversity.

• The Greater Brisbane Region is a paradise for bird watchers.
• More than 370 native and introduced species have been recorded from around Brisbane, making it the ‘bird capital’ of Australia.
• Brisbane is the only capital city in Australia that supports three species of flying foxes.
• Almost a third of all animal species are beetles and there are probably more than 30,000 Australian species.
• Insects begin life as an egg, although a rare few give birth to live young.
• The ‘songs’ of cicadas are one of the most familiar sounds of the Australian summer and each species (there are several hundred) has its own distinctive ‘melody’.

• Overall, the suite of coral species that occurs within Moreton Bay forms a community that appears to be unique in the world.
• Nine species of whale visit Moreton Bay Marine Park each year and it is the northernmost point in Australia for sightings of the Southern Right Whale.
• Cuttlefish are often referred to as the ‘chameleons of the sea’.
• It is estimated that Queensland Lungfish mature at between 10 and 20 years, and can reach at least 60 and possibly up to 100 years of age.
• Crabs are the most diverse
of all crustaceans in both shape and size.
• Most marine snails use gills
to breathe.

• The sea slugs (including the nudibranchs), do not look like typical shelled snails, but are, in reality, highly evolved gastropods.
• Marine Flatworms. Some of the most colourful and brilliantly patterned marine invertebrates.
• The most colourful species occur in subtropical and tropical habitats where they are commonly seen during the day.
• Seagrass beds are essential feeding grounds for the increasingly rare Dugong.
• Moreton Bay is an important feeding ground for marine turtles.

• The beautiful colours of moths and butterflies (Order Lepidoptera) are formed by thousands of tiny scales that cover the wings.
• Caterpillars spin threads of strong silk from glands just behind their mouth.
• Insects are an integral part of the ecology of natural, agricultural and urban ecosystems.
• Damselflies and dragonflies (Order Odonata) have two pairs of stiff, net-like wings.
• About 180 species of butterflies in five different families are found in South-east Queensland.